So Far from Home: From Fort Delaware to Finn’s Point 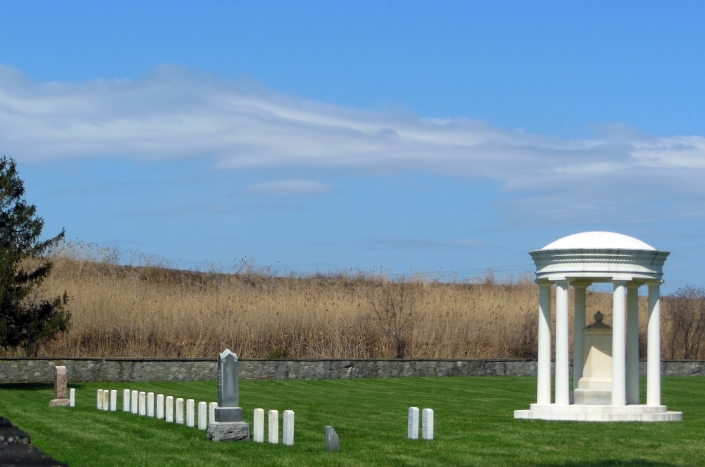 Since there were so many commemorations of the 150th anniversary of the Civil War in April, I thought it would be interesting to take a look at the role Delaware played in the Civil War, the war with more casualties than any other American war.

On a sunny morning in April, my husband and I ventured mere inches* from the Delaware border, across the river in New Jersey, to visit a hidden National Cemetery that contains the remains of more than 2,000 Civil War dead — Finn’s Point National Cemetery, adjacent to Fort Mott State Park in Pennsville, New Jersey. END_OF_DOCUMENT_TOKEN_TO_BE_REPLACED

Snowy first day of Spring at Wilmington and Brandywine

This past Winter was semi-brutal. I’d say brutal, but to be honest, last year was worse, and, well, I still have nightmares about the Winter of 1996 when the snow in January was deeper than my inseam. END_OF_DOCUMENT_TOKEN_TO_BE_REPLACED

This entry was posted in Delaware, New Castle County and tagged Snow, the first day of Spring, Wilmington, Wilmington and Brandywine Cemetery.

The colorful life and mundane death of Col. James Hemphill-Jones

Since it’s the birthday of the Marine Corps, and the eve of Veterans Day, I thought the story of this interesting Delaware veteran would be appropriate.

Tucked away in the middle of Wilmington and Brandywine Cemetery is the grave of Marine hero and Delaware native Col. James Hemphill Jones. His life story — and the headstone marking his burial place — are pretty remarkable. END_OF_DOCUMENT_TOKEN_TO_BE_REPLACED

My husband is a craft beer aficionado, and we often take road trips to try new beers and tour new breweries. It’s a lot of fun, but sometimes the road trips can be pretty long. When he told me he wanted to visit Mispillion River Brewery in Milford near the Kent/Sussex county border, I made a deal with him: If we passed a cemetery on the way south, we were stopping at that cemetery on the way back north. END_OF_DOCUMENT_TOKEN_TO_BE_REPLACED

On Presidents’ Day, I had to work; the bright side was that I got to take the car to work (which I rarely do) and had free time at lunch to go beyond the four block radius around my office.

END_OF_DOCUMENT_TOKEN_TO_BE_REPLACED

Lombardy Hall, tucked away on Rt. 202 in Brandywine Hundred, is the former home of Gunning Bedford Jr., framer of the Constitution and Delaware’s first attorney general.

His historic home overlooks the graves of over 3,000 people – except for one: The grave of Gunning Bedford Jr. END_OF_DOCUMENT_TOKEN_TO_BE_REPLACED 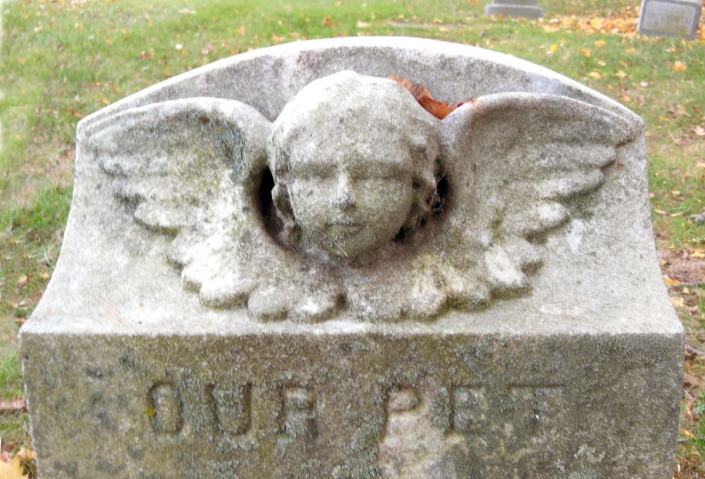 Ghosts in the graveyard 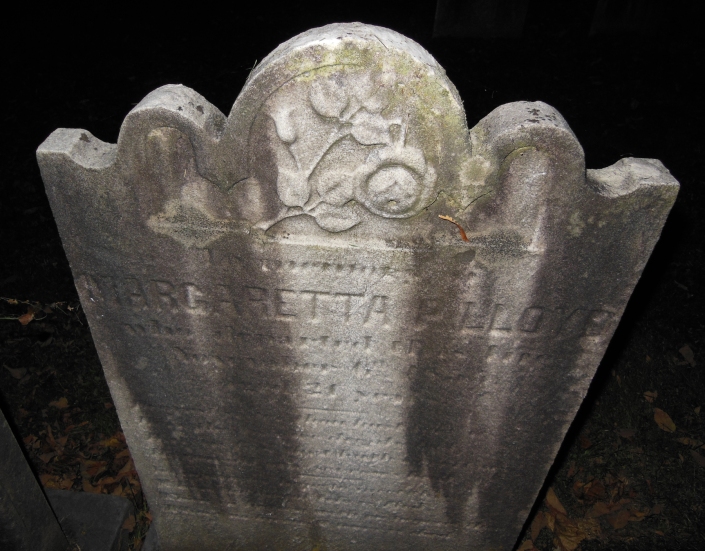 “Are you lonely, Margaretta?”

It’s an October Friday evening in North Wilmington, Delaware, and there’s a beautiful, bright full moon. My daughter is holding dowsing rods standing in front of the gravestone of Margaretta Lloyd, who departed this world at age 21, and asks the question. A carved rose on the gravestone  – not quite in bloom – signifies a life cut short. END_OF_DOCUMENT_TOKEN_TO_BE_REPLACED 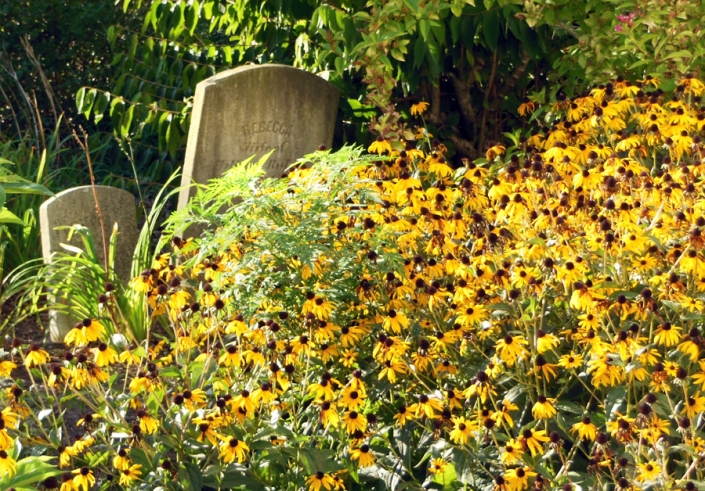 A few weeks ago, my husband and I were in Chincoteague, and went to 5 o’clock Mass at St. Andrew’s Catholic Church. When we were leaving, I noticed gravestones and a beautiful columbarium outside. It wasn’t what you might actually call a parish cemetery — more like a hidden, private burial ground, just the size of a backyard. It was overgrown with flowers, had a memorial bench on the street side, and the columbarium was fairly new. A statue of St. Francis added to the peacefulness of the tiny graveyard. END_OF_DOCUMENT_TOKEN_TO_BE_REPLACED 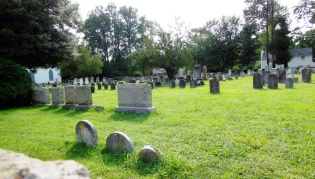 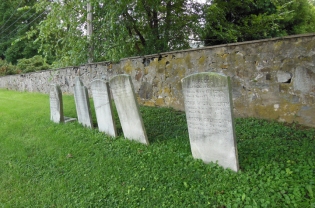 Older graves toward the back stone wall of the cemetery. (DDD photo) 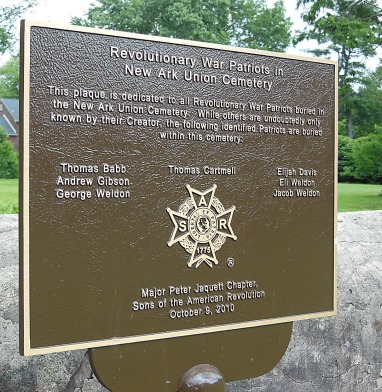 Marker at the gate commemorating the service of those buried within who served in the Revolution. (DDD photo) 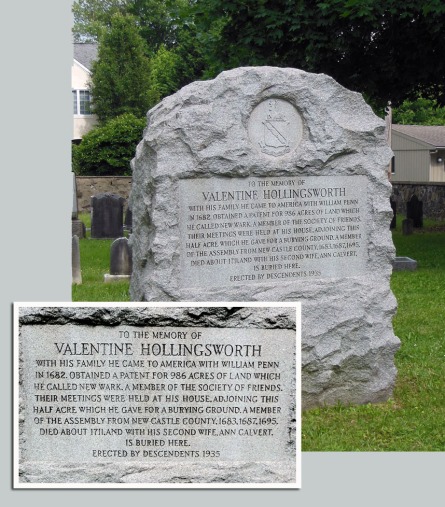 Memorial stone for Valentine Hollingsworth, early Brandywine Hunded settler, friend of William Penn, and original owner of the land where the cemetery stands. A Quaker, Hollingsworth would have disapproved of this monument, erected in 1935 by his descendants. Inset shows up-close detail of the inscription. (DDD photo) 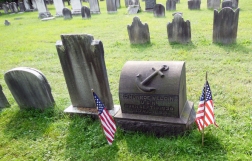 Was hoping I’d find more about G. Monroe Weldin online, but I didn’t. Wonder if he served in any war, especially the Civil War? Love the anchor on his headstone. Also notice that his stone is facing the opposite direction of the other stones around him. (DDD photo) 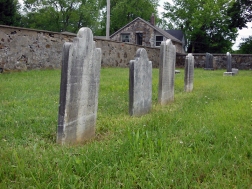 A row of some of the oldest graves in Newark Union Burial Ground, probably from the late 18th or early 19th century. Very hard to read, so I didn’t get names. (DDD photo)

The former Methodist church building next to the cemetery, now closed. (DDD photo)

I liked the progressive line made by these three markers. I thought it might be a family: mom, Jane Mole on right, and dad, William Mole, in the middle – with child on the left. As it turns out, the grave on the left belongs to Hannah Hearn, who died at the age of 29 and was married to someone name Thomas. (DDD photo) 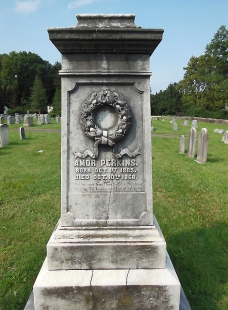 Amor Perkins. The back of his monument has a book, perhaps a Bible. he is related to the Grubbs and the Shipleys, and was a founder of the Methodist church that once stood by the cemetery. (DDD photo) 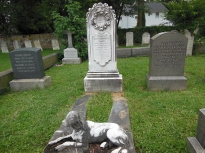 Joseph Carr died when he was only 26 years old in 1855. Buried next to his parents, he has the most interesting grave in Newark Union Burial Ground; there’s a statue of a dog, possibly a Labrador, at the foot of his grave. So, the questions abound: What killed him at such a young age? Was that a replica of his favorite dog? Is the dog buried with him? Those who know may never tell me. (DDD photo) 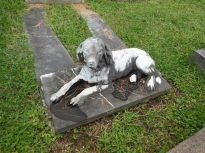 Close up of the dog statue at the foot of Joseph Carr’s grave. (DDD photo) 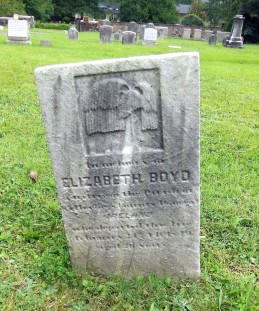 The headstone of Elizabeth Boyd, a native of Donegal, Ireland who died here at the younh age of 26. There’s an intriguing symbol at the top of her headstone: rain of sadness? sun shining down? Very interesting. (DDD photo) 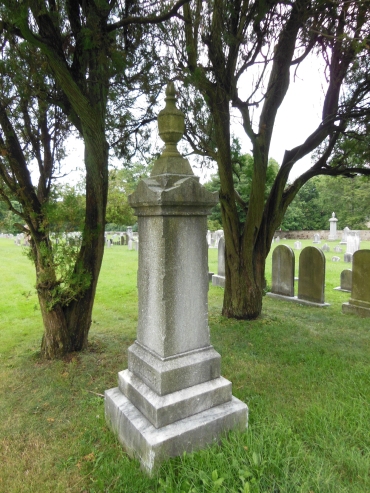 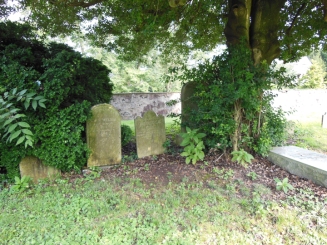 Under the few trees in Newark Union Burial Ground are some of the oldest graves of the early Weldin family. (DDD photo) 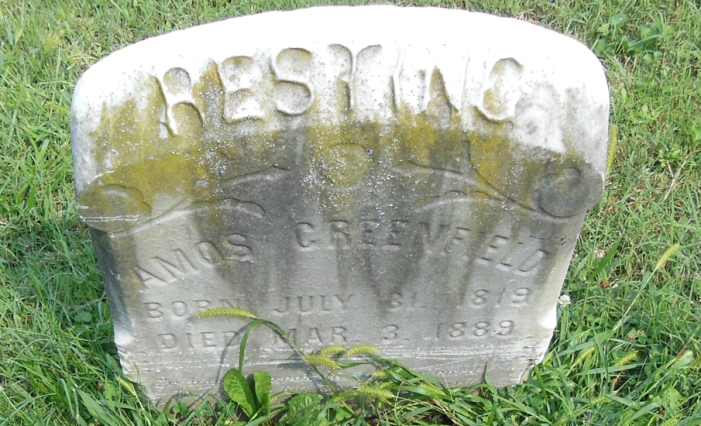 Not necessarily a word you’d associate with cemeteries. But this one was such a magical find, it conveys exactly the way I felt when I stumbled upon Newark Union Cemetery. END_OF_DOCUMENT_TOKEN_TO_BE_REPLACED